Adrienne Miller was the literary and fiction editor of Esquire from 1997 to 2006, a significant professional feat for a woman of twenty-five. She baffled the New York lit scene — past editors had all been men, and Esquire had published mostly male writers and famously sexist articles (including “How Women Age: A Man’s Survival Guide”).

In her new memoir, In the Land of Men, Miller says she loathed the dysfunctional system put into place years before her arrival, yet she recognized the importance of Esquire to American fiction. She hoped she could harness its reputation to again publish writing (by men and women) that was just as good as the magazine’s previous claims to fame: Mailer, Carver, and Hemingway.

Magazines like GQ, where Miller began her career, and Esquire taught a man how to be a man, while treating women like mysterious beings, focusing only on their physical traits.

“Why was ‘being a man’ so important? It was about power, that was why,” Miller writes.

She recounts her arduous work life surrounded by men, working for men, trying to convince men of her intellectual worth. She once discovered that a male colleague was making twice her salary, and she faced condescending treatment in the office. Up against insanely offensive jokes, nonstop comments about women’s bodies, and even sexual assault, she had to approach her job from inside a “Soviet tank of the spirit.”

But Miller also writes about her love of literature in high school in Ohio, and how most of the art she and her best friend consumed was by men and meant for male audiences. She loved the male-centered literary canon, even with its deep roots in an unfair and constrained idea of what talent looks like.

At the center of her thesis is the human paradox David Foster Wallace, who she edited and befriended and had a romantic relationship with. She says, “The truth: my career had been built around protecting male egos.” And while DFW was the biggest ego of all, he also, it seems, had a greater impact on her than most of the writers she worked with. Despite his infuriating qualities, she admits he was without a doubt a genius and one of the best writers she ever encountered.

Throughout their relationship, he exerted a perplexing power over her, often times coming across as “predatory.” He would willingly admit that he was a “sexist asshole,” in classic DFW self-deprecating fashion. Is to admit your sexism some kind of recompense? Maybe. Miller often wondered how much forgiveness he really deserved, while granting it anyway.

She writes, “What, you thought creative geniuses were pleasant people?”

(It must be asked: Would DFW still have a career in the #MeToo era? Hard to say, according to Clare Hayes-Brady, author of The Unspeakable Failures of David Foster Wallace. The Los Angeles Review of Books wrote of her book, “While acknowledging his misogyny, [Hayes-Brady] also believes he’s the greatest writer of his generation.”)

Miller, who is also the author of the novel The Coast of Akron, is an excellent storyteller and philosopher. She infuses her personal narratives with questions: What does it mean to be a mere cog in a machine, even with an esteemed editor’s title? Is power is really just a false construct? Is appreciation perhaps the most important characteristic to have in a world you can’t control?

In the Land of Men is part of the ongoing discussion about how we answer the question: What do we do with the art of bad men? It’s one thing to recognize the worth of the work and its ability to say something true. It’s quite another to worship the person behind the words, the “compromised” man. But is it actually possible to separate the two? Do we even want it to be? (DFW still has some of the most ardent fans, an ever-growing cult following.)

Early in the book, Miller contemplates what it means to really know another person, concluding that we never even get close to gaining a full perspective. The people we believe are bad are always loved by someone else. And yet, she counters, “when thinking in a sentimental way about kings, it is dangerously easy to forget about their power—about the severed heads upon which they walk.”

MEMOIR
In the Land of Men
By Adrienne Miller
Ecco
Published February 11, 2020 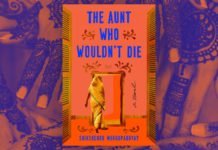 Agency, in Life & Death, in “The Aunt Who Wouldn’t Die” – Chicago Review of Books 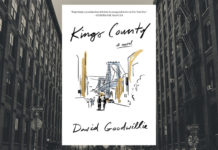